Motorsport History will be made in May

Motorsport history will be made at Gurston Down Speed Hill Climb on the weekend of May 28/29. The most unusual, certainly the quietest, and probably the “greenest”, of the cars taking part in the British Hillclimb Championship event will be a Toyota Mirai, which has no engine but produces energy for it’s electric motor through a hydrogen fuel cell. 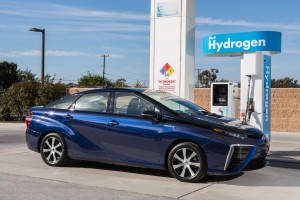 No such car has ever competed in the UK (or Europe) before, and the Mirai’s participation at Gurston will be under the watchful eye of motorsport’s governing body in this country, the MSA.

The Mirai, part of Toyota’s press fleet, is being loaned to journalist and racing driver David Finlay for this event. David is the editor of the online motoring magazine roofsideup.com, and is also part of the Multi-Car Hillclimb Challenge. Sponsored by Primo plc Multi Vehicle Insurance, and raising awareness for the Nationwide Association of Blood Bikes, the Challenge involves competing in a different manufacturer press car at every round of the British Championship.

“I’ve been involved in some strange motorsport projects before, but never anything quite like this,” says David. “The idea of breaking new ground is very exciting. Of course the Mirai isn’t a racing car, but I’ll be driving it as quickly as I can, and whatever else happens I’ll be the most environmentally responsible driver at the meeting. The only thing the Mirai will emit is a very small amount of extremely clean water. I’ll do more damage to the environment if I sneeze.

“The Mirai is also exceptionally quiet. I’ll probably be able to hear the spectators talking about me as I drive up the hill, so I’d better not make a mess of it.” 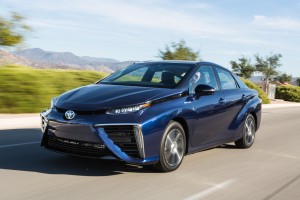