WOW! What a Weekend! 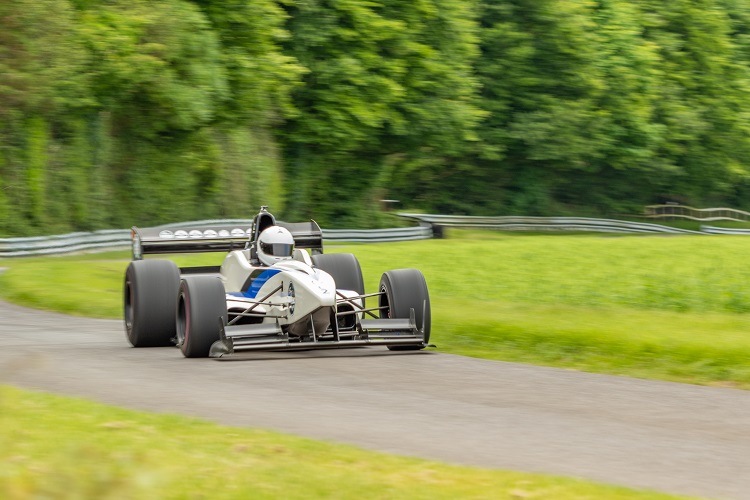 Records fell and the four Top Twelve Run-Offs were amazing.

There were over 110 cars and drivers competing in everything from standard road cars, specially prepared hill climb cars and spectacularly fast sport and single-seat racing cars. Spectators saw some fabulous performances.

Sunday saw Alex lower the record to 25.00s in the first run-off but the second run-off went to Scott Moran in the Gould GR59 Judd with a 25.47s.

More on those later in this report.

A good entry in this class of Interclub Licence holders saw Martin Watson in his Westfield win the class on both days. Saturday he had two very consistent timed runs ultimately finishing on 32.03s. Sunday he went quicker still finishing on 31.79s. Gary Hunt in his Jedi, chased Martin all weekend but could quite snatch the win away from Martin. Gary finished on 33.10s and 32.42s respectively. 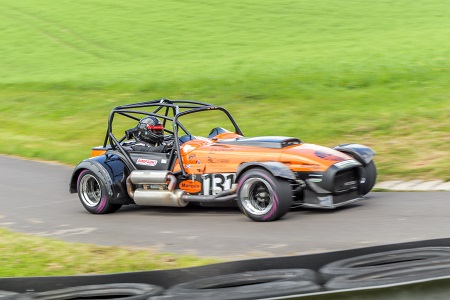 The long-standing record in this class fell on Saturday. The RS National record for the class now stands at 36.90s. Jonathan Langmead in the Lotus Elise 135R took the record below 37s for the first time. He won the class both days, Saturday with the record-breaking 36.90s and Sunday with a very similar time of 36.96s. On Saturday Robert Marwood was second with a 37.14s run, which was again below the existing record. But an issue on Sunday meant he did not take part.

Rodney Eyles in his lovely Alfa Romeo 4c had a great weekend, taking the win both days. On Saturday, the Porsche Cayman of Tony Adams took second with the Philip James in his Cayman third. That result was turned around by Philip. He snatched second from Tony on Sunday after they had identical times after the first timed run. A great battle between those two all weekend. 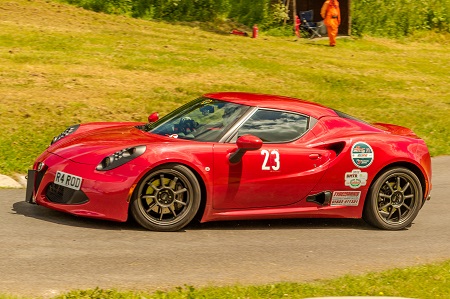 The new four-wheel-drive class had two Gurston regulars entered on Saturday and three on Sunday. Simon Neve in the Mitsubishi was dominant on Saturday finishing well ahead of the Audi TT of Tony Mullis. Simon finished on 35.96s, Tony on 40.17s. 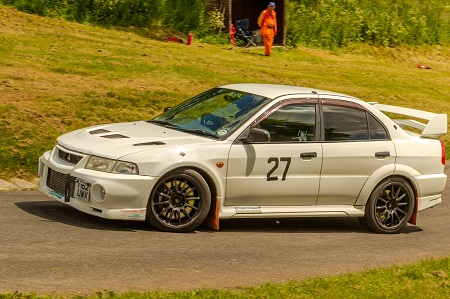 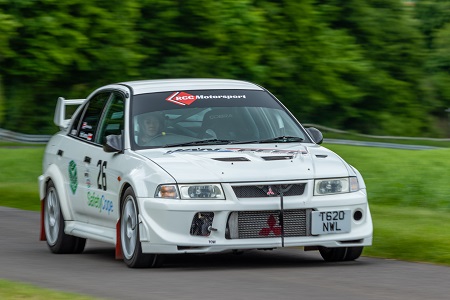 Robbie Birrell in the Lotus Exige V6 Cup was in sparkling form with wins on both days. His times were 34.95s and 34.86s respectively. He was pushed hard by Dylan Flesher, who took second both days, in the Caterham he shares with Jonathan Flesher. Dylan’s times were 35.27s and 35.23s. Jonathan was third with 36.34s and 35.96s respectively. 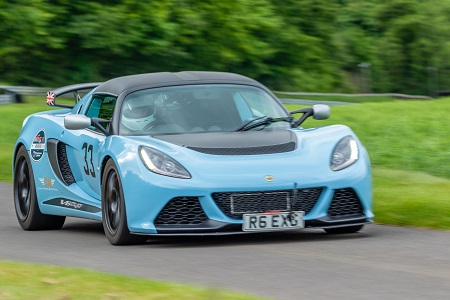 Andrew Russell in the Ginetta he has campaigned for many years was the only starter in the class. During the weekend, he improved his Saturday time, 39.46s, on Sunday and finished with 38.67s. 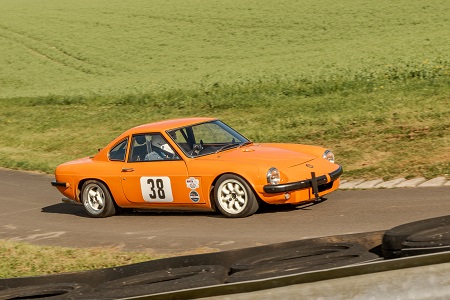 Stephen Moore in the Mitsubishi Evo RS put in superb performances on both days, dominating the class and leaving the real fight for second. Mark Walker in his Porsche Cayman had a good margin in second on Saturday but Sunday was completely different. Mark was third after the first timed run to Jonathan Williamson in the Porsche 911. Both drivers improved their times but Mark’s ended with 36.59s and Jonathan’s 36.64s, giving Mark second and Jonathan third. 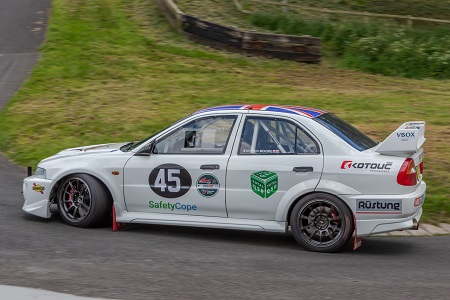 Steve Holland and John Griffiths both in the super quick Caterham Hyabusas had a great battle both days. Steve’s car having been repaired after an off at the finish line earlier in the season at Gurston Down won Saturday, beating John by just 0.09s. Steve’s time was 31.76s and John’s 31.85s. 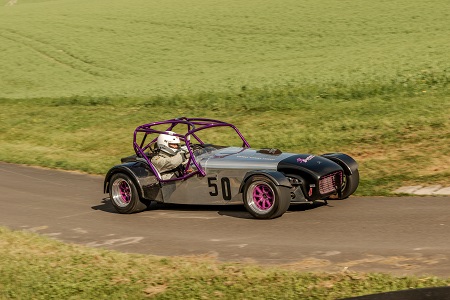 On Sunday the tables were turned. They both put in times that were lower than Saturday but John’s improvement was better. John won with a 31.16s and Steve with 31.54s. Remember these times are faster than some of the single-seater cars! 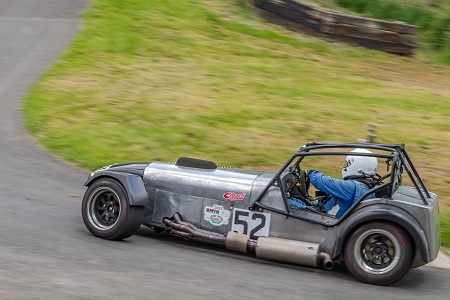 On Saturday, Tim Pitfield his DJ Firecat who is the current Gurston Down Champion was on sparkling form. He managed only one timed run and completed that in 33.10s, finishing ahead of the recently acquired Radical Club Sport shared by Oliver Wright and Anna Furness. Oliver finished on 34.76s and Anna on 39.14s. 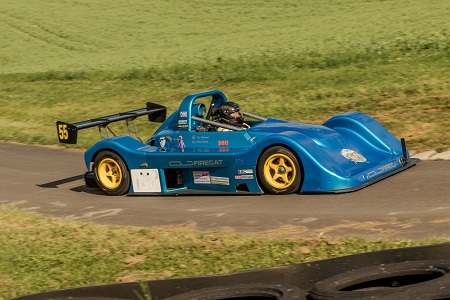 Tim didn’t make it out on Sunday. Both Oliver and Anna improved on their Saturday times, finishing on 34.04s and 36.18s. Anna’s improvement was just under two seconds. 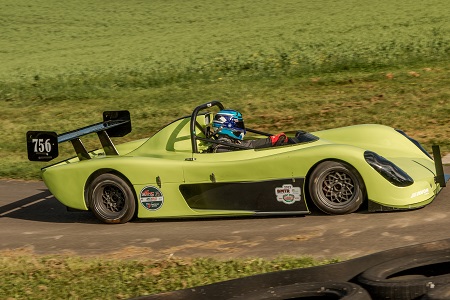 The mad Mini Evo of a former Manx Grand Prix winner (on a bike, of course), Allan McDonald took the win both days. Alan’s times were 32.55s and 32.21s. Bob and Robert Penrose’s Pilbeam MP92 was not only a sight but a sound to hear on the hill. Bob finishing second on Saturday and Robert second on Sunday. 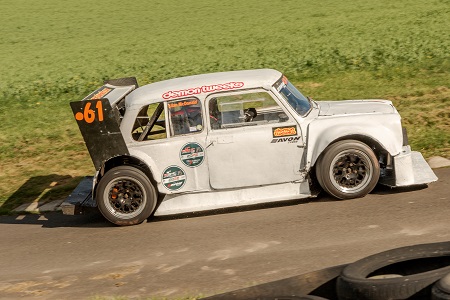 With the huge entry in this class, the car and driver needed to be on top form to take the win. Richard Summers in the DJ Firehawk was pushed very hard by Gurston regular James Moore in his Empire Evo. Richard took the win both days by just 0.24s and 0.03s on Saturday and Sunday over James. Richard’s times were 30.81s and 30.98s. James’ were 31.05s and 31.01s. Third place went to Richard Walker in an OMS with Martyn Turner in another Empire Evo, fourth.

Alex Coles in his Van Dieman RF86 had a great weekend, not only did he win the class both days but he made significant improvements in his time. Sarah Bosworth and her fellow competitors didn’t really have an answer to Alex’s performance. Alex’s Sunday time, 35.93s was just 0.12s slower than the record in that class. Alex’s Saturday time was 36.49s with Sarah finishing on 37.51s and 37.47s respectively. 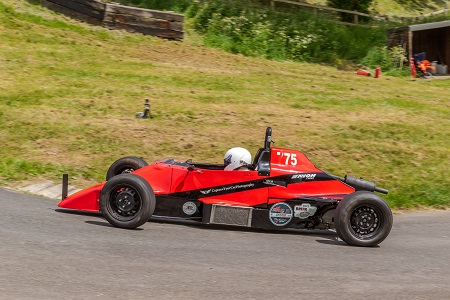 This was probably one of the toughest classes of the weekend. It has, not only fast drivers but some very light-weight and powerful cars. The class proved to be close with positions changing after almost every run. Saturday saw Adam Greenen in the brand new Empire Evo 3 head the class with a 27.98s second timed run, his only one of the day. David Warburton took second in the Gould GR59, 28.20s, Andy Greenen in the Evo 3 third 28.37s, with Richard Speeding in the GWR Raptor 2, fourth on 28.46s. That’s less than half a second covering the top four cars.

On Sunday it was Andy who pushed his brother back to third with Richard Speeding separating the shared Empire drivers. David was pushed back to fourth. Andy’s two timed runs were identical at 28.14s, Richard’s 28.35s, Adam’s 28.63s and David’s 28.63s. David fourth was decided on the other timed run where Adam went better. 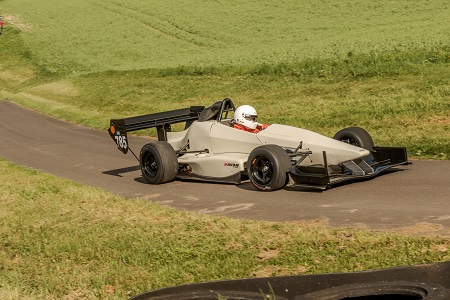 Johnathan Varley in the GWR Predator had a really good weekend, class wins both days. Lee Griffiths in the OMS 28 and Eynon Price in his Force TA made him work really hard for the wins. Johnathan was just 0.14s ahead of Lee and Lee 0.08s ahead of Eynon on Saturday. Johnathan’s time was 28.48s.

On Sunday Eynon pipped Lee to second. Eynon was just 0.19s behind Johnathan and 0.09s ahead of Lee. This class could have gone to any of these driver/car combinations. 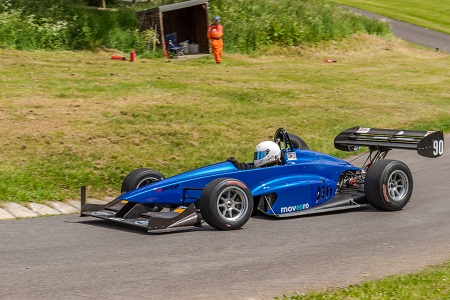 Simon Moyse in his Gould GR59, Kelvin Broad Force TA and Ben Stephenson in his Empire Evo were battling all weekend for the win. Simon won on Saturday with a 28.66s first timed run with Kelvin just 0.10s behind and Ben another 0.09s behind. No one could improve on their second timed run giving the win to Simon, Kelvin second and Ben third. 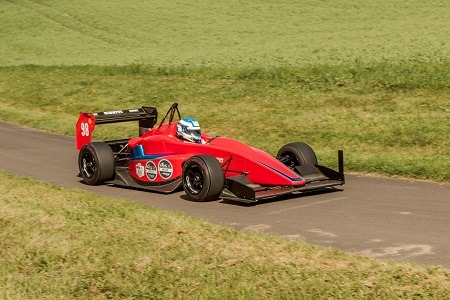 Kelvin had a better day on Sunday, taking the win at a better time than Saturday. Kelvin finished with 28.47s and Simon with 28.61s. 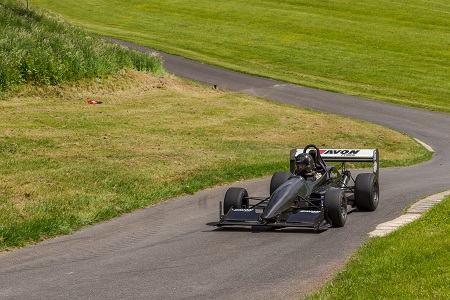 This class had a massive entry, some 20 drivers, and many sharing cars. On Saturday, Wallace Menzies in the Gould GR59M was ahead after the first timed run being one of the three drivers in the 25s timed runs. In the second timed run, Alex Summers in the DJ Firestorm put in a great performance and pulled the first place back. Alex’s time was 25.62s, Wallace’s 25.83s and the other driver under 25s was Scott Moran in the Gould GR59 Judd he shares with Graham Winn.

Sunday saw a very similar class finish with Alex, Wallace and Scott finishing in that order on 25.48s, 25.56s and 25.89s respectively. 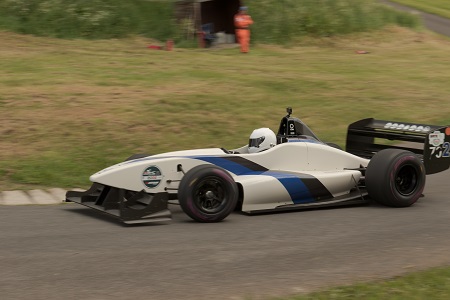 Racing and Racing Cars Built up to 1971

The Chevron B19 shared by Amanda and Richard George, in Amanda’s hands took the win in this class both days with a 35.02s on Saturday and an improved 34.49s on Sunday. 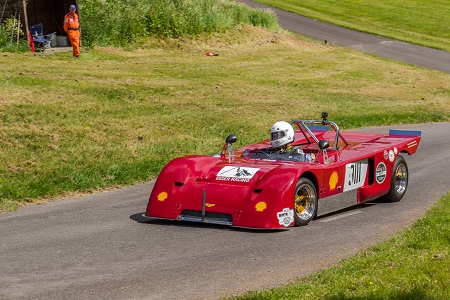 Joe Mackrell in the Tiga SF83 he shares with Roger Johnson took the win both days his time on Saturday was 35.02s and Sunday with a 35.86s. 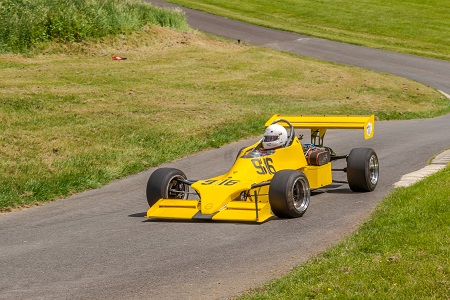 The second Run-Off was a mirror image of the first run-off as far as the first five driver/car combinations were concerned. Alex improved on his earlier run-off time and broke the hill record with a 25.02s scoring an additional point as did Wallace in second place as he finished on 25.32s. Scott was just 0.08s behind on 25.40s. Interestingly, both Adam and Andy Greenen in their Empire Evo 3 scored championship points, Adam finishing 8 and Andy 10th and great performance for the small engined car.

The first three were the same as Saturday’s run-offs and both Alex and Wallace broke the hill record standing at the beginning of the meeting. Alex lowered that record to 25.00s. Another great performance by Matthew Ryder in the GR59 Judd took fourth, edging Trevor Willis into fifth. 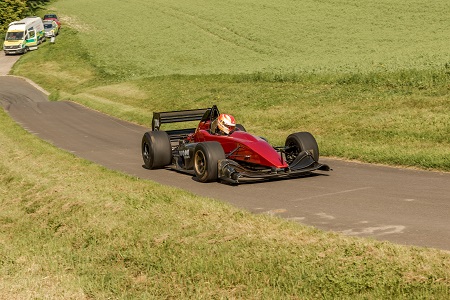 It was all changed in the second run-off on Sunday. Scott Moran in the Gould GR59 Judd pushed Alex into second and Wallace into third. David Uren in the Gould GR55 came in fourth with Matthew Ryder again in the top five. 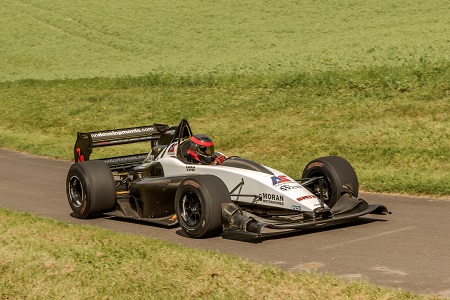 BARC South West would like to thank all of the drivers, spectators, marshals, back-office staff, Clerks of the Course, MSUK Steward, medical, rescue and every other person who helped us make the weekend such a great event. There were many people who stepped in at very short notice to run the office and help out on the hill.